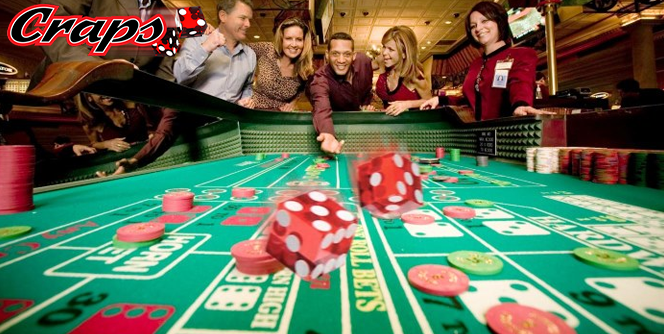 “Baby be nice Daddy needs a new pair of shoes” these lines make you remind of all the action happening at craps tables. Yes, it is common at almost each and every casino’s craps table which shows how exciting the game is. Before getting fascinated you must know how beat the odds and make your self a winner. It is more fun when you know how to play the game in the right manner. Most of you people looking forward to learn how to play the game craps and how to win due to its layout which looks too complicated even before trying it.

I know many people who play baccarat, blackjack, slots etc but never dare to try craps. But what if I tell you it a very easy game even it doesn’t require a lot of time to develop your skill for the game. Today I here you will get each and everything that can make you able to play the game as well become a master in it. So, without wasting any more time let’s get started.

Before getting started with how to play, rules etc you must be well aware about the history of the game. To understand better how the game was played traditionally and what all changes are done in modern times.

The craps invented in United States it is a simplified version of famous western European game Hazards. While hazards is also played by 2 dice and it was very popular in 17 and 18 century. In hazards, the dice shooter chooses a number from five to nine as the main number. But in craps, it is simplified as the main number is always seven in primary phase both games were rejected by elite class Americans.

Which created a way to introduce the game in local underclass of the society. It became instantly popular among the lands of Mississippi rivers and streets of New Orlean real estate development. Another game called pass by french has been there which also supplemented in the popularity of craps. There were many companions of the game hazard evolved over the decade and a possible mixture of all these game is now known as craps. The word craps is the Louisiana mispronunciation of the real word crab.

After years of invention, the game was regularly abused by casinos by using an unfair dice. In 1907, John H. Winn a Philadelphian dice maker introduced a layout which makes all the bets visible. This invention resulted in a remedy and saved the game’s reputation and most of casino are using this layout to provide a Fairplay. The game became popular again during World War 2 due to young mens from every class taking admission in military.

The soldiers use to play street craps they use blanket as a shooting surface many ex-soldiers share their war memory with the game. Street craps is usually the same game with added fines only major difference is street one doesn’t played on table while casino’s make you play on table only.

How to play craps for beginners?

The game basically contains three main rules which you can learn in a short duration of even three minutes. The guide I am providing here is meant for beginners which means the things are given in straight and simple language. Before starting with the rules of the game you must give answer of few questions. As without understanding these terms you cannot play effectively for a long period.

What is a Come Out Roll?

The game starts with a come out roll that’s the first term you require to jot down for playing craps. A come-out roll is the first throw of dice in a game or after finishing previous betting round.

What is the Shooter in the game of craps?

The second thing you need to learn is shooter which is the gambler who throw dice in the game of craps. It is the only casino game where player is in charge of the game as action is taken by him physically.

The game of craps moves as follows:

Two dice have been taken by both of you and throw the dices on the craps table. If you are playing it online all you need to do is just push the roll button. After rolling the dice there can be possibly three outcomes which will be based on the outcome of dice only. Now, let’s discover what these outcomes are and what effect that can make on the game.

Let’s start with natural when your dice indicates a value of 7 or 11 it is called natural. Getting natural means you won and entitled to get an additional chance to roll the dice.

When you get 2,3 or 12 than it is called craps. Which means you lose the game but still it doesn’t end here as you are entitled to throw dice again. Do you know getting a 2 is also known as Snake Eye haha! Note this as these terms will help you to create your impression on the table as an efficient player.

After getting familiar with the above two terms you are smart enough to figure out that having 4, 5, 6, 8, 9 or 10 as the dealer of the table marks your points. While in the online game a small white button appears on screen and which says on. Now all you have to do is throw the dice again and try to get the same number without having same combination you had before. If you successfully achieve this you win.

While learning these terms do you find 7 missing? It is widely believed that 7 is not a positive number that’s the reason if you roll a seven. It means you lose the game along with end of betting round.

First of all, take a closer look at the craps table you will observe that it is not only about dice and numbers. It contains different areas which are available for several betting options. As you are now able to determine the result of every dice roll now its turn to know how to make bet in the game.

On the end side of table layout, you will find two portions mentioned as Pass Line and Don’t Pass Line. You can use any of the portions for making a bet while selecting Pass Line you meant to bet that shooter will win. The shooter can win by rolling out a natural or making point before seven. If shooter losses the bet by making 2, 3 or 12 that condition is termed as crapping out.

The don’t pass bet is just opposite of the pass bet, In this player losses for getting 7 or 11. You are not allowed to reduce or remove the bet after the shooter has come out on a point.

You can see the come and don’t come lines in the middle of craps table layout. Come bet is almost same as pass Pass bet. The major difference between them is you make come line bet when a shooter establishes a point while pass line bet can be made before any point made by shooter. Come bet wins when a natural is rolled out and losses with a crap. After a point is rolled out then it comes the turn of come line bet.

In don’t come bet if the shooter rolls out 2 or 3 you win but if its a 7 or 11 then you are in trouble. A push again option is also there if the shooter rolls out 12. After a point is made you must wish for seven in next rolled out point of shooter. To turn off nay bet what you need to do is just wait after making a bet as long as it goes itself. There is always a possibility of making additional bets on come bet point which you can suppress or repress at any point of time you wanted.

A proposition bet is a one roll bet in which either you can hit or miss the game on next roll. I will suggest you avoid proposition bets due to high risk and higher value house edge. The bet can be placed on any roll.

If you make any seven bet which is also known as big red is the most popular outcome on roll. As it means you are betting that shooter will get a seven in next roll.

The second type bet is three way bet which is a kind of hard bet. As you are betting that shooter will roll a crap number that is 2, 3 or 12 Do you know? these numbers rolls rarely. That’s why it is believed as a hard bet due to its low probability of winning.

The third type of bet is Ace Deuce here you bet for rolling a three which means the dice always have to contain a 1 and 2. That’s why it is called ace and deuce this combination rolls frequently than any other combination.

The fourth type of bet is Aces where you are betting for rolling out two means each dice has to roll ace only. That’s why it is called aces.

The fifth type of bet is Boxcars also known as midnight. It means you are betting for rolling six in each dice which makes a total of twelve.

If you make a horn bet than you will win if a shooter rolls out 2, 3, 11 or 12. This bet is placed on the middle of table layout of craps.

Apart from these bets some exceptional situations you can witness in the game are:

You can win if you roll a 4, 6, 8 or 10 along with a pair of same numbers before the appearance of any other combination which makes a seven or a sum of that figure.

After the number is rolled out you can make bet on any number of the table. If it gets rolled out before seven you win in any other condition you lose.

As the name indicates you are betting that a 6 or 8 will be rolled out before 7. This bet pays only 1:1.

By reading the above information now you are fully aware of craps table, types of bets and rules to play. Yes, we covered that all in that tiny space. Let’s move forward to explore the craps app.

You can play your favourite game crabs even without making a visit to casino. Yes, it is possible by using the app which is available for various Operating system. The app is downloaded 5M times till the date along with 3k reviews which is a great milestone for a gambling app. You can also use this app for practising craps as being a beginner it is necessary to practise.

By this practice, you can make your skills stronger which is necessary before playing a real game. As there is a risk of losing your hard earned money along with messing up your reputation for the game. The game features a random dice and the gameplay is almost like a real casino. Beautiful graphics, melodious sound effects and the smooth gameplay are some other hot points about the game. You must also know that the game has been prepared by consulting by many casino experts.

The silent features of craps app are as follows:

You can easily download the app on your android mobile or device by following steps given below:

You can use a browser to play craps online but if you want to download the app by following steps given below:

You are now fully equipped with the necessary information about craps. This includes gaming, rules, how to play, how to make more money with it. I hope you find the information shared above is helpful and refer it to your friends and family. Still having any doubt with the game kindly mention it in the comment box below. Our team will try their best to clear it in our upcoming blogs.